WordPress is so ubiquitous these days on the web, but hopefully more developers will keep up with the security needs of their sites or at least delegate to someone to maintain after their site is built.

This ‘Wordfence’ security plugin is very impressive. It can do a site scan, block IPs or countries [China, anyone?], and give a live screen of current connections. It does much more as well, especially if the free version is upgraded to the paid version.

It has over 1 million installs as of September, 2015. There is a reason for that – even the free tools are very useful and can provide a fair amount of security. I recently installed this plugin on ‘Riguy’ and it is exactly what is needed for a security blanket. 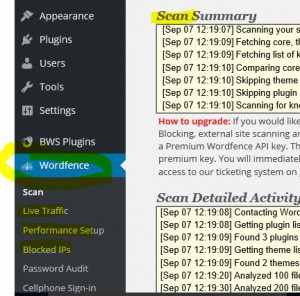 WOW, that was scary! I just went into my WP-ADMIN to update some Plugins and the theme [I heard there was an update @ 4.2.2], and I ended up losing my site: we are talking full on, white page, so a screen shot would not really do justice to how scary that is. There was no error code or message in site. Is this a “White Screen of Death”? I had the 2014 WordPress theme installed, nothing more except a few plugins. I did notice before trying to update WP 2014 that 2015 was sitting there unused, and I checked the box. Big mistake [?]. I guess I really should have simply removed 2015 altogether until I was ready to move to it or not checked the box. But shouldn’t we be able to update both the 2014 AND 2015 theme, without taking the site down? Lesson learned!

I also ended up with this rather ugly message in the Themes WP-Admin area upon finishing the themes updates:

“theme directory “twentyfifteen” does not exist”

Yikes! Site down, and limited options! Did I mention I am NOT USING 2015. I guess by checking both boxes, the assumption by the application is I wanted to upgrade to 2015.

I panicked and started searching frantically over at my friend, the Google search engine. Unfortunately, none of the fixes applied to my situation and some did not work for me. The fix was surprisingly easy, but I admit I ‘rolled the dice’ on it, as I was not sure if I would lose my site for good, or at least until a full reinstall. [I DID have some backups of the content].

I was still able to get into my http:// sitename/wp-admin so at least I had that going for me. Gratitude! I went into the Appearance and themes area, which is where the ugly message was showing and I added the 2014 theme back. I reinstalled it. This all happened so fast, I had to do it twice – sorry but I am not sure why this was necessary, but the WP 2014 site indeed came back!

Although I am slowly but steadily using this Azure-based WordPress site …  My blog is located here ! It is Google’s BlogSpot service. Even though I am a Microsoft guy, I do try to keep my technical interests spread around a LITTLE bit.

Or more to the point >>> http://exploringwindowsos.blogspot.com/

That is really my ‘site’ these days, but I also put the latest feed entries to the right …

This is a Windows Azure hosted site. I am mainly exploring this free hosting service from Microsoft to verify the efficacy of its business use. Azure is one of the largest Cloud providers in the world. They have datacenters world-wide with massive DNS caching and data redundancy. I use and support it at work for virtualization and web site hosting.

It can be found at:

Greetings. This is my latest personal web site experiment. I am using the most recent WordPress version to test, explore and to complement a few work projects, and really, to have some fun on the weekends.

In another world [Windows Azure], I am using WordPress. I really love WP – it is not only the top blog site software these days, it is the top CMS as well. Put the acronyms aside – WP powers millions of sites worldwide and is basically at the tops of all the charts.

The new + always improved WordPress (4.0) is out!
I always like the ‘under the hood stuff’, as opposed to ‘bells and whistles’ stuff ;>