I found this neat little game, called “Surf”, that can be played right within the Microsoft Edge web browser. It is very basic, but it is pretty darn fun. This takes web surfing to another level (cheesy, I know).

Within Edge browser, type this to turn it on:

Surf is a very basic arrow and spacebar driven game, with a timed surf race competition. That is all. Surf away!

Whether you like Microsoft Teams or not, it is set to auto-start with most newer versions of Microsoft Office or Office 365. Even if you do use Teams, you may not want it starting automatically every time your computer boots up and you log in. To keep Teams from opening automatically, check out these simple instructions.

I have not worked with Windows 7 in quite a while, but lately I have learned that Microsoft has been very generous with a FREE Windows 10 upgrade. So long as you have a viable, licensed copy of Windows 7 on your computer, it should be doable. Many older PCs or laptops have the license key on the outside of the machine.

It is surprisingly easy to upgrade although it can take a few hours, depending on the age of your computer and your Internet speed.

The free upgrade to Windows 10 essentially all happens within the Media installation tool. It will assess your current computer and/or operating system and then download the full Windows 10 operating system. You can also download an image to a USB flash drive and boot straight off of that. But if you want to do an in-place upgrade while logged into your Windows 7 computer, the Media tool is easiest. Back up all your files to a USB drive etc. or to the Cloud [Microsoft One Drive, Google Cloud or similar]. Again, you can upgrade your computer to Windows 10 while logged into your Windows 7. You should not lose any files, but back up all the files beforehand to be safe.

This is the link to the Media installation tool. Go to the “Download tool now” or the “using the tool to upgrade this PC to Windows 10” link for more information.

One can never get enough of Windows 10 Update History. I found the latest Windows 10 news interesting in that version 1903 and 1909 are nearly identical. There does seem to be some change. The latest versions are interoperating, meaning version 1909 is a master switch for 1903.

You have been warned. Microsoft Paint is moving to the Microsoft Store. Egads! This may be part of Microsoft’s ongoing goal to slim down their operating system. But the hallowed “PAINT”, built right into the operating system will surely be missed by many. It has been a quick and easy way to resize images and well, digitally paint. It has been one of the originals for years!

But, yes, the Paint App can always be downloaded from the Store.

According to “Tech Radar”, Microsoft is working on a lightweight version of Windows 10. The reason behind this project is to have a viable operating system that can be installed on devices, laptops or tablets that are lighter in dimensions. In other words, devices that have relatively smaller ‘specs’, such as memory / RAM, hard drive, or CPU. These devices normally have smaller screens. Think Chromebook.

This is exactly what the article refers to, and personally, I am surprised that Microsoft seemingly gave up on this Chromebook dominated market years ago. Many students and others prefer lightweight systems for a variety of reasons, but classroom learning in a primary factor: elementary and secondary students in particular do not need powerful systems. In fact, cheaper is better in my view, given the beating these systems take in backpacks and in dirty classrooms ;>

Chrome and the latest Windows 10 April Update have a very big issue together, considering the millions of PCs running Windows 10 AND Chrome worldwide. Chrome will not open up SSL based sites after the latest April Windows 10 update [1803]. Some are pointing to the CryptSvc [Windows certificates service] as the cause of the issue or creating a conflict with Chrome. Going over the various sites covering this issue, it is clear that a viable solution has not been found. Consumers and businesses end up reformatting drives or reinstalling Windows 10 fresh without the latest version update [1803], or worse, chasing false hopes such as “uninstall your anti virus” [that is not the issue and a poor decision] or “stop the CryptSvc” [very bad, and wrong, idea].

The secure connection problem points to TLS or HTTPS or even the new ‘QUIC’ technology perhaps? This is just intuition at this point, but I would guess that QUIC is involved – it is a Google creation that ties in with data transport, and the symptoms point to it as a possible culprit that does not play nice with the latest Windows 10 update.

QUIC is a new transport which reduces latency compared to that of TCP. On the surface, QUIC is very similar to TCP+TLS+HTTP/2 implemented on UDP. Because TCP is implemented in operating system kernels, and middlebox firmware, making significant changes to TCP is next to impossible. However, since QUIC is built on top of UDP, it suffers from no such limitations.

It appears this Update will allow users more control over the sometimes over-the-top Notifications. Per MS, “… people spend an average of 23 minutes per day regrouping and getting back on task after being distracted by a notification”.  They are giving us “Focus Assist” to help adjust notifications as needed.

Tech Support 101 – You ever try to resize a Windows 10 Explorer [folder/file viewer, not the browser] window only to have the window blow up to full screen? I admit that I have endlessly gone through this – grab the edge of the window and drag it to a desired position on the screen, but once you let go, it maximizes, whether you like it or not! Repeat. Rinse, etc.

Drag the edge of the screen and move it JUST RIGHT. There it is! Anyway, there is an easy fix and putting Tech Support 101 at the beginning of this post is really aimed at myself: all I had to do was pay a visit to the “Ease of Access Center” once and for all instead of procrastinating. Type ‘ease’ into Cortana to locate it or visit the Control Panel.

Get to the option that mentions “EASIER” [!]

Scroll to the bottom area. Finally, you need to check, “Prevent Windows from being automatically arranged when moved to the edge of the screen”. Now, my Windows behave as needed. 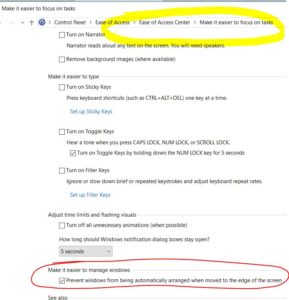 Microsoft has a wonderful proactive family or child safety type of feature that is very nice and extremely useful. It monitors your kid’s web browsing, Apps use, and overall screen time. It sends a weekly report to the parent. It is all set up through the parent’s Microsoft account. This service is free and super easy to use. Your child does not even need to know about it. I know, I know, this makes some uncomfortable. But remember – you are not ‘Big Brother’. But you are Mommy or Daddy.

It is a very good idea to peruse the simple, emailed weekly report – you never know when your child will start to wander into potentially dangerous areas of the Internet. It takes under 30 seconds to review.

“Add kids to your family to help them stay safer online. Adults in the family can view reports of kids’ online activity, limit how long and when they use their devices, and help make sure they don’t see inappropriate websites, apps, or games. Manage family settings online at account.microsoft.com/family, and changes will be applied to any Windows 10 device the child signs in to. You can also add adults to your family who will also be able to apply settings to children in the family. ”

I get this weekly ….