I decided to try “Ubuntu on a Stick” – it is not an odd restaurant menu item, but rather a way to either boot into and test drive the latest Ubuntu version [in this case, 18.04] via PC or to straight out install onto a PC partition via the ‘stick’, or flash drive. I ended up doing the latter within 24 hours, replacing a Windows 10 OS.

Ubuntu has an awesome tutorial, but here is the summary. I followed their perfect instructions and all went well. I was ready, willing and able to install Ubuntu on a 3 year old HP Pavilion 360 touch screen, after learning that touch does work efficiently now on recent Ubuntu Linux . I purchased a separate laptop with for my Windows 10 needs, but I believed this older HP Pavilion [touch ready] 360 is perfect for Linux – and it is.

Although I did test drive Ubuntu for 1 night, working right off the USB flash drive, which is always pretty darn cool, I did have to remember a few details once I decided to move forward with installation. Number 1, if installing Ubuntu on the entire PC or laptop hard drive, you will lose all the data due to the formatting for the new OS, so use extra, extra, extra caution! Backup all files beforehand to another source. In my case, I had moved a few files that were needed but almost all my files were in “OneDrive” Cloud storage, so it was easy.

Number 2, if using Win 10 – on the new hybrid style Windows 10 shutdown mechanism, in certain cases, the SHIFT key has to be held down as you exit Windows 10 in order to shut down 100% and get up the BIOS screen. This is needed in order to shut down, start up and to tap “ESC” [for this HP] in order to have access to BIOS and boot menu options. That is needed [and is a prerequisite] for Ubuntu to be installed on the laptop via the USB.

Ubuntu “on a stick” in sum? Get a USB stick [say, 4+ Gigabytes]; Download the latest Ubuntu .iso; download “Rufus” for burning or writing the .iso image to the USB stick.

Open Rufus, point it to your downloaded Ubuntu: 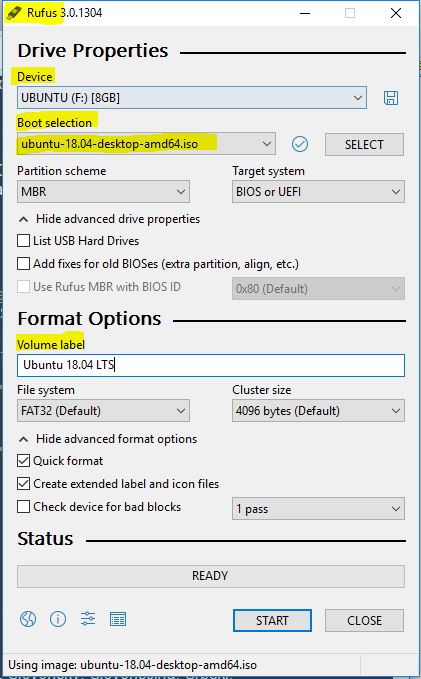 Right, it wipes out ANYTHING on this USB. 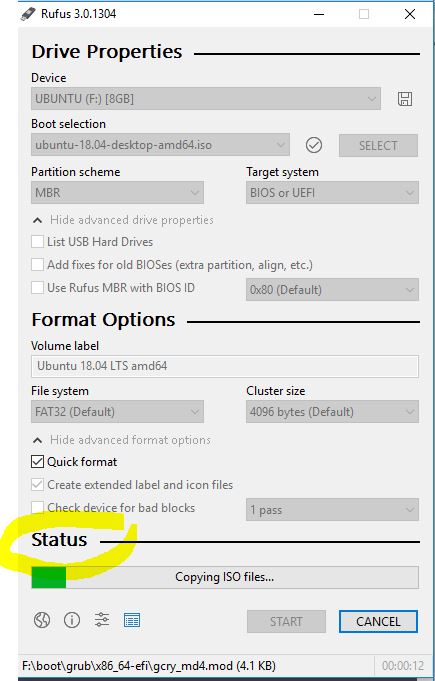 Here is the USB flash folder layout – an entire Ubuntu Linux world on a stick, as seen from my new Windows 10 laptop. This is an ISO image, which enables booting from the USB drive [referenced above]. In reality, there is no need to go into this folder, because you boot into the Ubuntu OS straight off the stick, which of course must be inserted first, AND booting from USB must be enabled and moved up to top in the boot sequence. 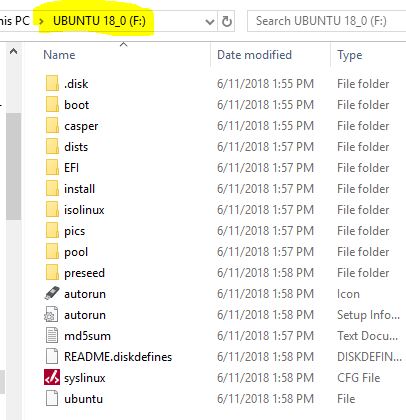